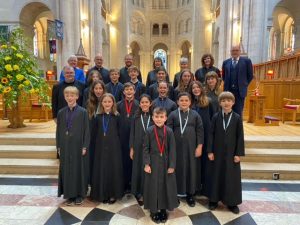 From Ashley Viola:
After a leisurely morning welcoming in the warmth of the sunlight after several overcast days, the group assembled at the magnificent Saint Anne’s Cathedral in Belfast, referred to as Belfast Cathedral. The choir was delighted upon arrival to see a prominent advert showcased on the side of the building featuring and welcoming The Choirs of Grace Church! We immediately knew this was going to be a special event, and felt so thankful to be sharing our music in a beautiful setting and with wonderful people.

Built on the site of the old parish church of St. Anne’s (1776), the builders laid the foundation stone in September 1899. They demolished the old church at the end of 1903, and it opened for public worship in the Cathedral’s Nave in June 1904.

Building continued for over a century. The Cathedral’s most notable features include four semi-circular arches to its windows and doorways, and a distinctly Romanesque style. The Cathedral’s most recent addition is a bold and contemporary stainless steel spire, lowered into place in June 2007. 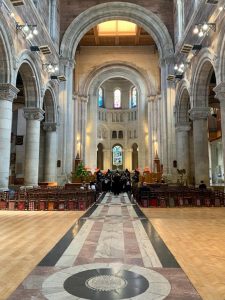 The choir began to rehearse around 11:30, and immediately realized the cathedral’s acoustics were quite special. Like a distant echo, the cathedral holds on to each note and bounces it back into the audience before it disappears into the air. Dr. Allen likened this feature to a damper pedal of a piano, and encouraged the choir to enunciate the final syllables of words and “play” with the sound. What a special treat we were all in store for!

Dean Stephen Forde began with opening remarks and welcomed the choir with open arms. He noted the pieces in the choir’s repertoire were favorites “on both sides of the Atlantic” and that he was thrilled to receive all of us. Dean Forde finished by saying, “It is with huge pleasure that we welcome Patrick Allen and the Choir of Grace Church in New York to St. Anne’s Cathedral in Belfast this afternoon”. 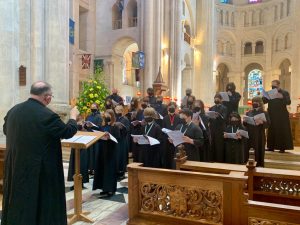 The concert thus began, with a processional to “Psalm 24” through the Cathedral’s Nave. Singing a selection from the Choir’s repertoire, songs included:

REJOICE IN THE LORD…….Anonymous (16th Century) 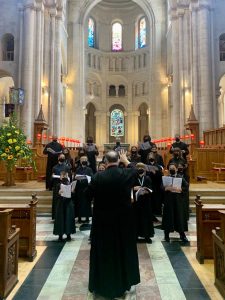 After a celebratory rendition of “The Virgin Mary Had a Baby Boy,” the Choir received a round of enthusiastic applause from the audience, which included not only the families of traveling choristers, but Cathedral parishioners, Belfast locals, and even some tourists. They then recessed to “Psalm 150,” back up through the Nave and completed the event.

After breaking for independent lunches throughout Belfast, the group reconvened to journey to the Titanic Museum across the river Lagen.

The people of Belfast are quite proud of the Titanic, as it was built here by many hands. As our tour guide Connor remarked, even though the Titanic sank on its maiden voyage, the ship was perfect when she left Belfast, save for her Scottish engineer and English captain! This comment elicited some hearty laughter from our happy crew. 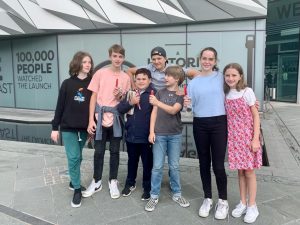 The Titanic Museum was an impressive institution with several interactive and multi-dimensional galleries throughout its structure. Beginning with information about Belfast’s storied history as an industrial hub and a cargo discharging port in the 19th century, the museum took us through the history of building the famed ship in what was considered at the time the world’s largest shipyard. The museum’s impressive array of exhibits included audio-visual, walk- and even ride-through exhibits showcasing the state-of-the-art mechanics and luxury finishes of the great Titanic. 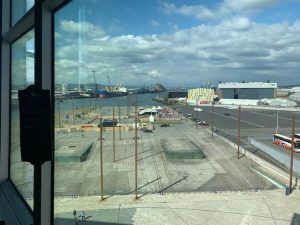 The children were truly impressed when they learned there were roughly 700 third-class passengers aboard the ship, all of whom had to share just two bathrooms!

Our group felt especially connected to the story of the Titanic when we were reminded of our very own member of Grace Church, Edith Corse Evans, who notably gave her own life and space on a lifeboat to those who had children and families. What a memorable and moving experience to learn more about her time and fateful journey.

We completed our tour with an immersive film experience showcasing the wreckage and discovery of artifacts some 14,000 feet below sea level.

After our visit at the Titanic Museum, we all had some time to rest and prepare for our travels back to Dublin tomorrow before assembling once more for our final farewell dinner at James Street, a contemporary restaurant near our hotel. Much laughter was shared at this dinner, with toasts to our fine choristers and adult singers and wishes and prayers for another tour together as soon as possible! 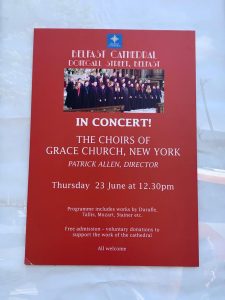