Grace Church Welcomes Ondřej Horňas to Bach at Noon Tuesday 16 May at 12:20 p.m. 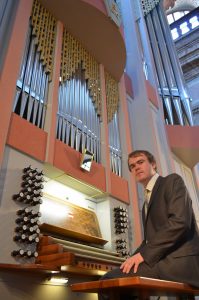 Join us as Grace Church welcomes organist
Ondřej Horňas
as guest artist for Bach at Noon
on Tuesday 16 May at 12:20 p.m.

After graduating at Conservatory in Olomouc in
Petr Rajnoha´s organ class, he has continued studying at JAMU in Brno under the guidance of Pavel Černý.

During his studies at the conservatory he represented the school at conservatory presentations in Olomouc and Pardubice. He got involved in many masterly organ courses led by major worldwide famous organ players (O. Latry,W. Zerer, L. Mallié J. Tůma, P. Svoboda T. Jellema, E. Wiersinga, …). He also finished the organ academy in Sarlat at Michael and Yasuko Bouvard´s class.

He regularly gives concerts not only in the Czech Republis but also abroad (Germany, Austria, France). In 2015/2016 he studied at Institut supérieur des ATS de Toulouse in M.Bouvard and J. W. Jansen´s class.
He constantly works with choirs, instrumentalists and also singers.