The Choir of Men and Boys 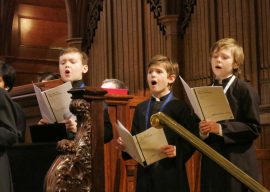 is made up of some 30 boys and a professional ensemble of 6 to 12 adult altos, tenors and basses. The foundation is based on the Anglican Cathedral model of Choir where the boys do the work of professional soprano vocalists. The repertoire offered by the senior ensemble is based on this tradition in SATB configuration rather than on the treble dominated style of the modern children’s chorus.

The Grace Church Choir of Men and Boys was established in 1894, and in the fall of that same year the Church established a Choir School for the academic and musical training of the boys.

Thus, in its One Hundred Twenty Eight year history The Choir of Men and Boys at Grace Church has had only five directors. It is the oldest resident Boy Choir in continuous service in New York City, and its school served as a model for the Choir Schools at the Cathedral of Saint John the Divine on Morningside Heights and at Saint Thomas Church Fifth Avenue. The Choir School which began with sixteen boys has evolved into Grace Church School which today comprises some four hundred boys and girls spanning grades pre-kindergarten through eight. In the fall of 2012 the High School Division of Grace Church School opened and now comprises grades nine through twelve.

During its distinguished history this Choir was the first to have its Christmas Eve Service of Lessons and Carols televised nationally. The Choir has sung on many occasions at the major concert halls in New York City including participation in performances of Mahler’s Eighth Symphony and Massenet’s Hérodiade at Carnegie Hall. New anthems are commissioned regularly for the Grace Church Choirs including most recently works by René Clausen, Fenno Heath, Barry Rose and Gerre Hancock. 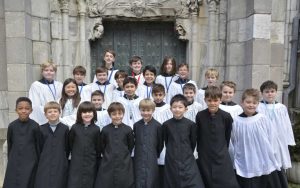