The Bells of Grace Church

The bells in the tower of Grace Church now 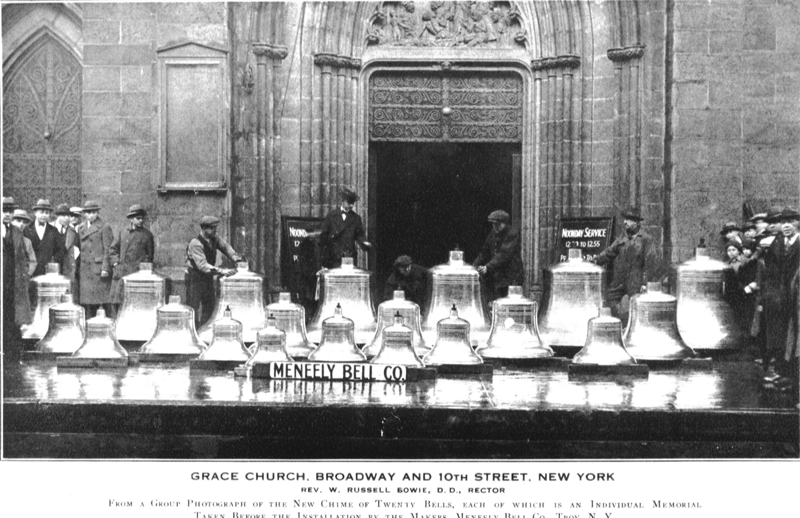 number twenty, a complete carillon, and they furnish a full chromatic scale covering an Octave and about two-thirds, or exactly from the lowest toned bell B flat to F natural above the second C, for the highest tone.

The eleven former bells have been recast to perfect pitch and tone color with the nine new bells.

The complete mechanical playing action for the bells was given by Mrs. Francis C. Huntington.

It is largely owing to the devoted interest of Miss Mary H. Gilles, assistant organist of Grace Church, that the new memorial bells were given.

Below follow the bells, in numerical order, in memoriam, and the donors:

By Members of the Congregations.

By Wife and Mother.

By Florence and Watson Dickerman.

By Mary U. Hoffman.

By Families of Francis Griswold Landon and Dallas Bache Pratt.

The 20 bell chime (The cast bell chime is defined as a musical instrument possessing between eight and twenty-two bells, played from a keyboard. Instruments with twenty-three or more bells are known as carillons) located in the tower of Grace Church was cast in the year 1924 by the Meneely Bellfoundry of Troy, New York.

In 1998, the former electro-pnematic action was replaced by a modern electric system by the vanBergen Company. The bells were played from a small keyboard located next to the Schlicker Organ Console in the Choir.

The Chime of Bells has been restored to the glory of God through the generosity of Mrs. Carter M. Braxton and Michael and Philippa Straus. Easter Sunday 12 April 1998.

This playing system for the bells was first used on Easter Sunday 1998. It was struck by lightening during the Summer of 2010.

In the fall of 2011 a new midi controller system was installed by the Verdin Company. It is through this system the Bells are now rung daily.