Join us as Grace Church welcomes organist
Leonard Sanderman, as guest artist for Bach at Noon on Tuesday 24 October at 12:20 p.m.

He was initially taught the organ by his father, and later by a.o. Clive Driskill-Smith, Sietze de Vries, Ben van Oosten, and Steven Grahl. He participated in masterclasses with a.o. Hans Haselböck, Pieter van Dijk and Peter Williams. He is currently taught by Nigel Allcoat.

He is internationally active as a performer and conductor, and was recorded for a live broadcast on BBC3, as well as multiple CDs. Leonard is a commissioned composer, and contributed significantly to the New Dutch Hymnal.

Leonard is a doctoral researcher at the University of York, researching constructions of gender and sexuality in Anglo-Catholic church music. 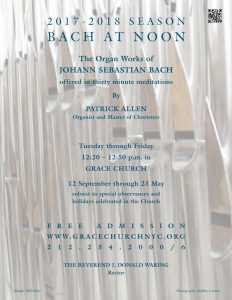