Sunday 3 March at 4:00 p.m. King David, an oratorio by Arthur Honegger to be offered by the Adult Choir 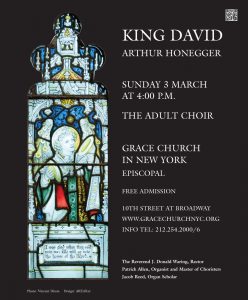 King David (Le Roi David) was composed in Mézières, Switzerland, in 1921 as incidental music for a French play by René Morax. It was called dramatic or symphonic psalm, but is also offered as an oratorio, without staging. The plot, based on biblical narration, tells the story of King David, first as a shepherd boy, his victories in battle, relationship to Saul, rise to power, adultery, mourning of his son’s death, and finally his own death.

A special feature of the work is the narration to be realized by Bob Martini and Mary Connally.

The work is just over one hour long and will be offered in English. Bring family, friends and neighbors and enjoy this beautiful tale of faith and redemption offered by the Adult Choir. 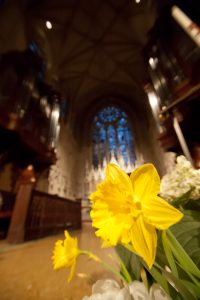