Welcome Dr. Barry Rose to the Saturday Organ Meditation on 25 January at 4:00 p.m.

On Saturday 25 January we welcome organist and friend Dr. Barry Rose who will offer the organ meditation at 4:00 p.m. The title of his program is CHRISTMAS IN RETROSPECT!

Dr.Rose has been a regular visitor to this country since the early 1970’s, when he directed one of the first choirmasters’ Conference to be held at St.Thomas’ Church, 5th Avenue – he will return there in May of this year (the month in which he celebrates his 80th birthday) to direct the Conference for a record 9th time.

During his ten years at St.Albans, the Cathedral choir visited the USA no less than 5 times, and on their last visit (before he ‘retired’ in 1997) they sang a memorable concert here in Grace Church, with guest organist Peter Richard Conte. In more recent years, at Dr.Allen’s invitation, Dr.Rose has renewed his contact with Grace Church and each year at this time has conducted the boys and girls at their annual Junior Choristers’ concert, recently completing a set of Sacred Songs specially written for them, and being premiered here tomorrow afternoon at 4.00 pm. He was also honoured to be invited as guest conductor of the church choirs at the Opening Concert of the new organ, in April, 2013.

Although he makes no claims to be a concert organist, Barry Rose has given recitals at many of the major venues in the UK, broadcast and recorded as a soloist, and next week will play on the world-famous Wanamaker Organ in Macy’s store in Philadelphia.

Today, in a retrospective mood, he presents a program of contrasting Christmas music, featuring a variety of musical styles, specially chosen to highlight the exciting and wide range of tonal qualities in the new organ. 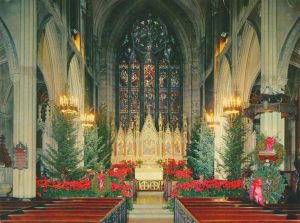